4 more years will cost us dearly 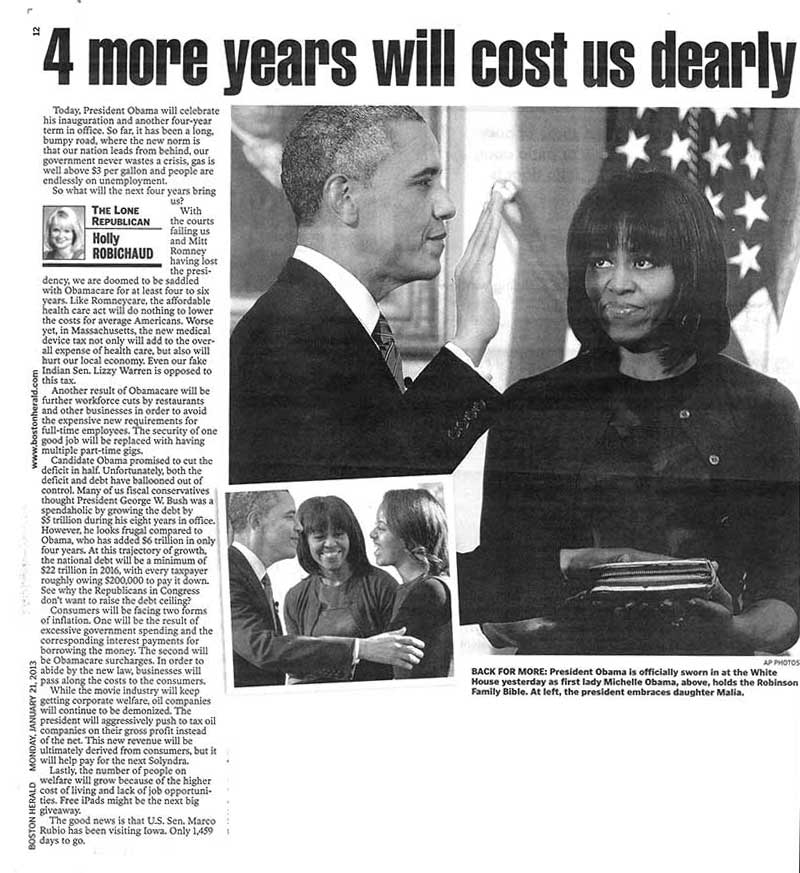 Today, President Obama will celebrate his inauguration and another four-year term in office. So far, it has been a long, bumpy road, where the new norm is that our nation leads from behind, our government never wastes a crisis, gas is well above $3 per gallon and people are endlessly on unemployment.

So what will the next four years bring us?

With the courts failing us and Mitt Romney having lost the presidency, we are doomed to be saddled with Obamacare for at least four to six years. Like Romneycare, the affordable health care act will do nothing to lower the costs for average Americans. Worse yet, in Massachusetts, the new medical device tax not only will add to the overall expense of health care, but also will hurt our local economy. Even our fake Indian Sen. Lizzy Warren is opposed to this tax.

Another result of Obamacare will be further workforce cuts by restaurants and other businesses in order to avoid the expensive new requirements for full-time employees. The security of one good job will be replaced with having multiple part-time gigs.

Candidate Obama promised to cut the deficit in half. Unfortunately, both the deficit and debt have ballooned out of control. Many of us fiscal conservatives thought President George W. Bush was a spendaholic by growing the debt by $5 trillion during his eight years in office. However, he looks frugal compared to Obama, who has added $6 trillion in only four years. At this trajectory of growth, the national debt will be a minimum of $22 trillion in 2016, with every taxpayer roughly owing $200,000 to pay it down. See why the Republicans in Congress don’t want to raise the debt ceiling?

Consumers will be facing two forms of inflation. One will be the result of excessive government spending and the corresponding interest payments for borrowing the money. The second will be Obamacare surcharges. In order to abide by the new law, businesses will pass along the costs to the consumers.

While the movie industry will keep getting corporate welfare, oil companies will continue to be demonized. The president will aggressively push to tax oil companies on their gross profit instead of the net. This new revenue will be ultimately derived from consumers, but it will help pay for the next Solyndra.

Lastly, the number of people on welfare will grow because of the higher cost of living and lack of job opportunities. Free iPads might be the next big giveaway.

The good news is that U.S. Sen. Marco Rubio has been visiting Iowa. Only 1,459 days to go.